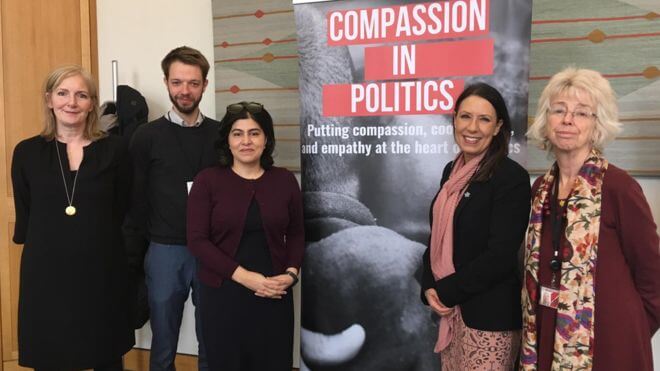 Tomorrow, Tuesday 3 March, politicians from at least five parties will launch a group aimed at changing the culture of politics and promoting policies and practices built on compassion.

The group will be chaired by the Labour MP Debbie Abrahams and the Conservative Baroness Warsi. Other politicians involved in setting up the group include the MPs Tracey Crouch, Ben Lake, Caroline Lucas, Martyn Day and Baroness Ruth Lister.

The All Party Group, or APPG, is expected to work both on reforming processes at Westminster so that decisions are made in atmosphere of cooperation and respect and on developing policies aimed at building a more united and compassionate society.

Options previously discussed by the Secretariat of the APPG, Compassion in Politics [1], include a new code of conduct for MPs, creating new constituency boards to increase public interaction with their MP, and the introduction of a law to prevent any future government legislation from pushing people into destitution.

Compassion in Politics says there is a great deal of public support for these proposals and for the mission of the new APPG. Polling they carried out with Opinium found that 60% of people believe politicians need to be more compassionate, 68% think governments should be judged on how they treat the least well-off in society, and 79% say the way politicians currently treat one another is a problem for the political system [2].

“Today we are both hugely proud to launch the new All Party Group for Compassionate Politics. This group will work to put compassion at the heart of the politics of the future, to provide a platform to voices and stories as yet untold, and to transform Britain from a divided nation into one which offers care, support, and aid to all people of all backgrounds.

“After all the progress made towards greater gender and race equality, a politics of hate and division has emboldened racist and sexist abuse on a scale neither of us thought we would ever see again. A toxic language given a platform by some irresponsible politicians, the media and others, is finding its physical manifestation in the violence we see on our streets.

“We will seek to reform outdated political structures so that they are fully inclusive, open, and transparent. We will call out hateful language, discrimination, and intolerance. These are basic principles but at this time of rapid change, uncertainty, and pain they are principles worth repeating and embedding in our politics.”

“This new group is going to help change politics for good. It will be the much needed voice for compassion, respect, kindness, and inclusion at the heart of a system which has moved so far away from those basic values that most of us still believe in.

"The work Compassion in Politics has already done outside of parliament has shown me the appetite for this kind of intervention. Britain is a compassionate nation but with rising levels of hunger, homeslessness, and infant mortality it has lost its way. This group of compassionate minded MPs and Peers will be working to put the country back on course and I know that once this APPG is up and running it will find a great deal of support on hand to carry its proposals through.”