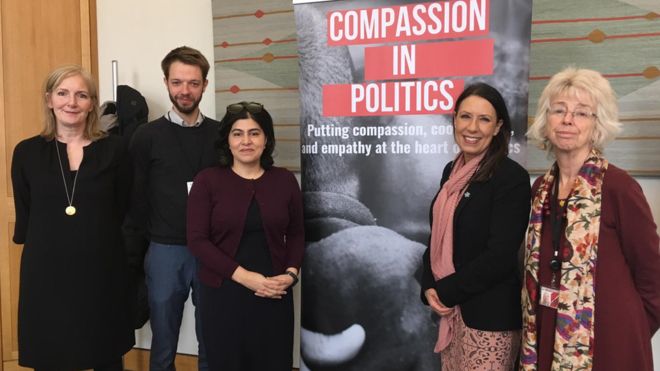 Staging mass walkouts in Parliament to protest against "hate speech" is among the ideas being discussed by a new group of MPs and peers.

The cross-party group says it wants to "put compassion at the heart of politics" - and is proposing a code of conduct for Parliament.

The group - which met for the first time on Tuesday - is concerned about the "toxic" tone of debate.

Among the ideas debated at the first meeting, in Parliament's Portcullis House, was a Compassion Act to prevent governments "leaving the most vulnerable worse off".

The Compassion in Politics group is co-chaired by Conservative peer Baroness Warsi, who said: "After all the progress made towards greater gender and race equality, a politics of hate and division has emboldened racist and sexist abuse on a scale neither of us thought we would ever see again.

"A toxic language given a platform by some irresponsible politicians, the media and others, is finding its physical manifestation in the violence we see on our streets."

The group's other co-chair, Labour's Debbie Abrahams, said: "Our work is not about left or right, red, orange, green, or blue. It is about people. It is about humanity. It is about what is just and what is fair."

The Oldham East and Saddleworth MP was sacked from Labour's front bench in 2018 following a probe into workplace bullying.

At the time, she rejected the claims "in the strongest possible terms" and described the internal Labour investigation as "neither thorough, fair, nor independent".

The new group, which also includes Green MP Caroline Lucas and former child poverty campaigner, and Labour peer, Baroness Lister says a Compassion Act would also ensure the current generation does not benefit at the expense of future ones.

Similar legislation has been introduced in Wales, Scotland, New Zealand and Bhutan.

In 2015, the Welsh Assembly passed the Wales Future Generations Act which states that public organisations have to take into account the long-term effects of any decision they make and also the knock-on impact it may have, in terms of the prosperity of people in Wales, its environment, culture and communities.

However, barrister Rhodri Walters who sought to use the law to stop a school closure last year said the legislation was "virtually useless".

Other proposed ideas emanating from the newly-formed Compassion in Politics group include:

The group says a code of conduct for behaviour in Parliament, based around the conciliation service ACAS' rules, would oblige MPs to talk to each other with respect.

They also discussed the idea of "collective action" in Parliament - walking out of the chamber if they felt language had crossed the line into "hate speech".

The all-party group has been set up by the Compassion in Politics campaign, which was founded in 2018.

It is not the first recent attempt to improve political discourse in the UK.

A Civility in Politics awards scheme is offering £3,000 to politicians who "behave with courtesy". The winners will be announced later this month.