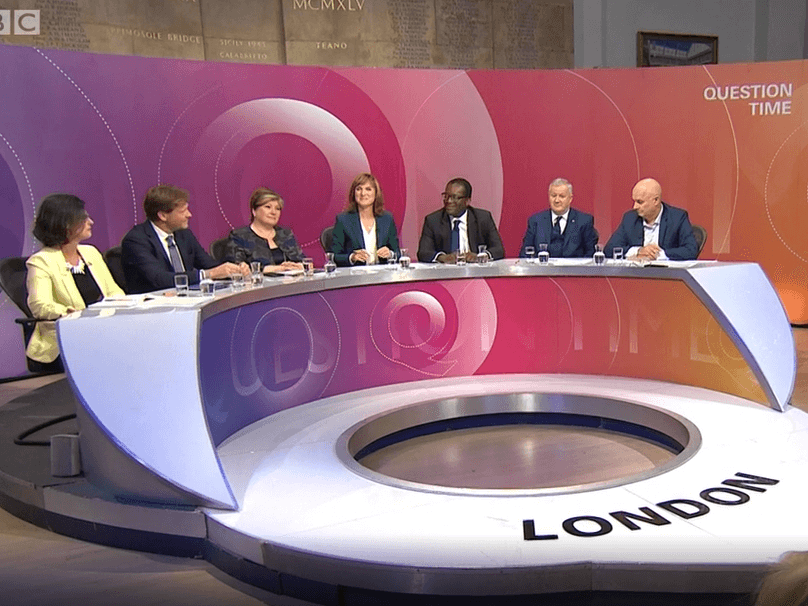 A group of politicians have written to the BBC asking how the institution intends to tackle what they see as the growing “toxicity” of the politics show Question Time [1].

The letter was sent in response to the recent admission by the show’s presenter Fiona Bruce that she was surprised by the “levels of toxicity” on the show.

In their letter the politicians also condemn the BBC’s decision to share on social media the comments made by one recent audience member, later revealed to be an active supporter of Tommy Robinson, who claimed migrants were “flooding in” to the UK.

Debbie Abrahams MP and Baroness Warsi sent the letter to the BBC on behalf of the new All Party Group for Compassionate Politics which they co-chair. The pair argue that the BBC has a duty to avoid inflaming hate while promoting views which are built on evidence rather than stereotypes and assertion.

They ask the BBC to clarify how it sources members of the audience and panel for the show and if any efforts are made to deliberately invite or attract members of controversial far-right groups. They also ask that the BBC consider introducing a new code of conduct for panellists and the audience and to stop sharing inflammatory videos from the show on its social media channels.

“We believe that the BBC offers a vital public service to this country and one that we can, by and large, be proud of. It therefore has a duty to, where possible, share only those views which are built on evidence or, at the very least, delivered in a manner consistent with the values that most of us are expected to uphold. By providing a platform for views that are racist or sexist, the institution is normalising them and contributing to the coarsening of public debate and the growing toxicity of our politics.

“We therefore invite the BBC to let us know what steps it will now be taking to ensure that the recent controversies surrounding Question Time are not repeated.”

Co-Director of the organisation Compassion in Politics Jennifer Nadel said:

“The BBC is a pivotal and influential British institution and Question Time is one of its flagship political shows. What is said on that programme, how the panellists behave, and the views and ideas that are expressed can have an enormous impact on public sentiment. The BBC must do all it can to avoid the show playing host to views which are discriminatory or likely to incite hatred.”